I posted the great Michelle Malkin’s “To Stop the Multiplication of the Unfit”, the harrowing true story of Margaret Sanger’s true agenda in founding Planned Parenthood on their own action wall on Facebook.

Not surprisingly, I was immediately called a racist for objecting to the wholesale slaughter of black babies. Black lives matter, but only if you agree with their narrative. Like Pavlovian dogs, it works every single time. Say this.

And you will hear this. 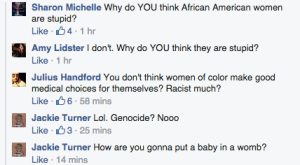 From my sister…
I hope once you pass out you’ll also remember the time Mom ate too much at Thanksgiving and then watched Willy Wonka on TV and got nauseous and even mentioning that title did her in.  It’s funny about Thanksgiving — all this time to prep this large dinner with a meat that most people don’t enjoy and insist on partaking of and denying themselves food throughout the day in order to eat this large carefully presented meal in 5 minutes and then sit on a couch while dreading the state of the kitchen and what to do with the leftovers.
All true, but at least the following never happened….
Tha

To date,18 women have accused noted actor and comedian Bill Cosby of rape or sexual misconduct in some degree or another. Sixteen of accusations have been lodged in the media or social media in the past week.

On behalf of all victims, it is to be hoped that is none of this is bandwagon jumping or hysteria. Does any of this sound alarming?

Here is how ESPN, the AP  and the Oakland Tribune quoted him.

And here is what he really said…..

In any juvenile bullying situation, you will see a bully, a target and many, many bystanders. These bystanders are kids who know better, feel awful but do not speak out. If one would, think about it. The impact it would have on the entire situation would be awe-inspiring. Other children would immediately speak out; the bully would hear this, as would those who identify with the aggressor and those who feel sympathy as well as the victim.

One voice has the power to make another voice speak up, or silence the laughter of another. It can make another shut up or make yet another realize he or she isn’t alone and this isn’t ok, but I will be someday.

The laws of the jungle carry forth to the means streets of social media and life. Women put up with rude comments online and cat calling in public and are now ridiculed for asking for legislation to outlaw this boorish behavior.

Don’t get me wrong, I am always happy to dump on these Shiite feministas, however my own experiences make me at least understand why they might be asking for such laws, society never sticks up for them. They didn’t as children and they don’t as adults. As a whole, we are teaching our children not to bully, but we aren’t teaching them what to do when they see it in action.

Everyone has either been catcalled or witnessed the same. But has anyone ever witnessed a male bystander just standing up and telling the All talk no action bigmouth to just shut up? I haven’t either. Men say whatever they want, at any time to whomever they want all the time with positive results. When a woman tries this the outcome is not quite the same.

I recently took down a picture I loved from a collection for which I paid several hundred dollars because I got tired of the following strangers’ comments:

“What Can I say? Your Header pic won me over”

“Mostly the uncropped version, which reminds me, I’ve got a Jacuzzi that’s been acting up. “

“well….are you going to come fix it or not?”

“so about that tub…”